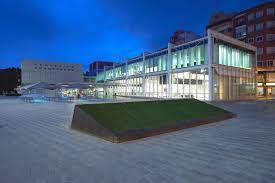 This Meeting will take place at the Congress Center (Centro de Congresos) of Elche. Click the photo below to see its location in Google Maps

How to reach Elche

Elche is connected to the rest of the Mediterranean coast and to Europe by the A-7 motorway (European Route E – 15). Another of the main routes for long-distance journeys is the N – 330 highway of the State Network, which links the province of Alicante with the centre of the Peninsula. In addition, there is a network of connecting roads such as N – 340, between Alicante, Elche and Murcia, which passes through Orihuela, and also the N-332 coastal road, which unites Elche’s coastal region with other tourist areas. A motorway from Alicante to Cartagena (A-32), which connects Elche with both cities, was recently inaugurated.

Elche is located at the mid-point on the local train line which links Alicante and Murcia, and which boasts a high frequency service which facilitates connections to any point on the Spanish mainland. The railway, which traverses the city by an underground route, has two passenger stations in the city centre and a stopping point in the town of Torrellano. A project for the construction of a Madrid-Alicante high-speed AVE link in the future provides the prospect of a service to Elche, and will thereby strengthen the city´s communication network.

Elche also has a modern bus station located adjacent to the railway station, with regular services both to nearby towns as well as to major national and international destinations.

BY AIR AND SEA